The Alister Hardy Trust is a registered charity run by a Board of Trustees with the object of furthering the work of Sir Alister Hardy in promoting the study of religious and other related areas of human experience and disseminating the findings. The AHT seeks to address itself to three primary areas of concern - objective research, communicating findings to the public, and offering a forum for discussion for those interested in personal spirituality. This it aims to do through supporting the work of the Alister Hardy Religious Experience Research Centre (RERC). The lynch-pin and pivot of the AHT's work are the Religious Experience Research Centres at the University of Wales Trinity Saint David and Glyndŵr University under Directors appointed by the university. The AHT is supported by the Treasurer, Secretary, and the members and the Chair of the Trust's Board; and is restricted in what it can achieve by limited resources and ability only to give advice with regard to the research work of the RERCs on what it deems important to achieve the best results.

The AHT & RERCs currently operate within the University of Wales Trinity Saint David and Glyndŵr University as shown below. NB As of November 2015 the AHSSSE was disolved and and amalgamated into the AHT: 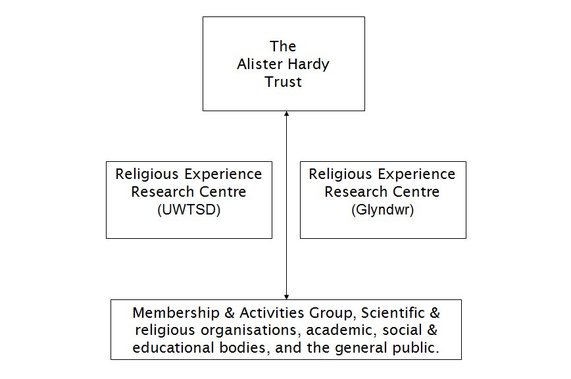